Mummy’s boy and beyond 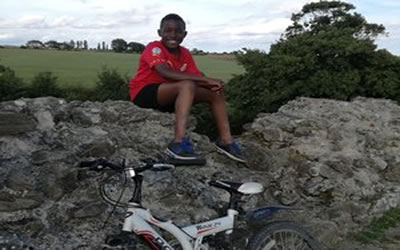 I count myself blessed to be a mother because I get to be an accountant, nurse, teacher, chauffeur and even a psychologist, all in one day. I salute mums who also have the privilege of working full time with all the added responsibilities in the home.

In my opinion, having two boys in my household is equivalent to watching a live football game in my living room with footballs shattering light bulbs and windows. I sometimes feel sorry for myself but even more for my daughter who is the only girl among two boys. She’ll be lucky to read her favourite story in peace without a brother jumping on her bed saying “BOO”.

A top parenting expert rightly said that “mothers need to allow dads to develop their own relationship with their children- and in particular with their sons. This statement resonates with me as a mother of two boys and a girl. From an early age both sexes tend to gravitate towards their mother for obvious reasons as mothers are normally the primary parents. Boys however from the age of six years old tend to hit another phase in their development where there’s a desire to emulate a male role model. Steve Biddulf describes this phase in his book on raising boys as the ‘switching on of boys’.  This is the reason why in some cultures, as soon as a boy reaches puberty, the men accompany him into the woods to teach him how to kill wild animals. They believe that it is time for the boy to rise up and begin to act like a man. An increase in testosterone levels in boys makes them very competitive and dominant in any social setting. It will be a good thing for mothers to allow fathers or male role models an opportunity to teach their boys how to channel their energy the right way.

I can still remember when my son got to that stage where he was always asking of daddy and we constantly had negative reports from school almost each day. I realised very quickly after reading the book on Raising Boys that my son loves me a lot but he’s also desperate for the attention of his father who was working around the clock. It came as a surprise when brief appearances by his dad at his school’s football games perked him up. The change was so obvious that he decided to pay more attention to him and all that attitude became history.  You do not need to have a lot of time in order to spend a little bit of time with your son. Even doing the school run a couple of times each week, attending occasional school trips, playing football in the backyard or park will go a long way.

How To Support Us

How to support the Mission

Latest From Our Blog